I bought X-Men: Mutant Apocalypse when I was but a small boy filled with wonder and hope. I spent all of my Christmas money on it. It was something like $105 at a Radioshack and I paid this because I’m Canadian and I make poor decisions. I took it home and was thrilled that I could play as a number of my favourite X-Men characters (but let’s be honest, everyone wants to play as Wolverine all the time and there’s so little reason to care about anyone else, at least when you’re 11).

And then…. I couldn’t make it past the second fucking level. I remember trying, certainly. I spent $105, afterall. The platforming was clunky and the enemies abundant. And, when you lost a character, you fucking lost that character. I remember thinking to myself at the time that I’d been suckered into buying a game I should have rented. But I saw the ad for it in Nintendo Power and it looked so good (those 4 screenshots in the ad really sparked my imagination!). I went for it. I took the plunge.

I’ve previously written that I don’t have the patience for games that are pointlessly hard. I’m not even sure that this game is pointlessly hard. And, additionally, I’m afraid to play the game now only to discover that I was a simple child (this was maybe the case). But I can tell you that this game was a perfect example of the GameEnder Scenario.

The GameEnder Scenario is when you play a game and are having a great time with that game up until a single point of failure. This failure could be the result of something you’ve done or something the game has done to you through poor design. This sounds like whining. Sometimes it is. So, you reach the portion of the game where you encounter this frustration that prevents you from moving forward in the game. You try a few times. You turn the game off. You maybe never play that game again.

I one put something like 30 hours into Chrono Cross, which was not a difficult game generally. I got to the a pivotal point in the game where I had to fight some significant boss and this boss beat me. The boss-fight itself was pretty long and the game didn’t seem to be especially compelling. I never touched the game again. Not once.

That’s likely an extreme case, but a great example of the GameEnder Scenario being my own fault.

An example of the GameEnder Scenario being the fault of the game itself would be Final Fantasy Tactics and the Weigraf battle. It’s notorious for being one of the toughest battles in the game and if you’ve either level built too much or not enough it can really ruin your day. I’ve known at least one person who suffered GameEnder in this way.  In this case, the issue often has to do with multiple save games. If you can’t win the battle, and you saved before the battle, and you didn’t have more than one save, you could very well be stuck on this fight some 15 hours into the game (or whatever) and be force to started entirely.

X-Men Mutant Apocalypse might have been my gateway to GameEnder Scenarios… a game that I played for a very brief time, got very annoyed with, and stopped playing altogether. There were probably lessons I could have learned from the process. I could persevered and learned something about seeing things through. Or I could have worked tirelessly to squeeze my dollars out of the purchase. Or, I could have done what I did in this case, which was get super frustrated, take the game out, toss it in the corner of the room and play some motherfucking Super Mario Kart.

(I AM SORRY THAT THIS TURNED INTO SOME STUPID ESSAY ABOUT HOW I QUIT THINGS EASILY, BUT MAYBE YOU DO THE SAME THING SOMETIMES AND SHOULD SHARE YOUR TALES IN THE COMMENTS, I GUESS)

Word to the wise: don’t get your flatmate hooked on Mario Kart.

Oh, you might think it’s terrific at first having a Player 2 at the ready, but you’ve got to understand: it’s not just a “bridge title”; it’s a gateway drug.

It’s like being married to a nymphomaniac – you might think that’s an awesome problem to have, but wait until you’re red, raw, run down, and can’t get a damn thing done*; then let’s see what you have to say about it. Oh yes, you can most definitely have too much of a good thing. Try telling that to my flatmate, though, who’ll happily put “World on a String” (as performed by Michael Bublé) on repeat for the entire duration of the morning commute, because it gets him pumped for a day at work.

I’ve worked long and hard at expanding his horizons, but it seems he can only latch onto one new thing at a time before culture club is adjourned. Oh well, I suppose listening to the Pulp Fiction soundtrack on repeat instead of Billy Joel is progress.

Thus far, I have failed to replace Super Mario Kart Wii. Can you see how that might be a problem?

I have another friend who’s stuck on Super Mario Kart. Not stuck as in “can’t finish it”, but stuck as in he keeps coming back to it. He uses the Classic Controller on Mario Kart Wii, if only to simulate playing it on a SNES. I’m pretty sure his frustration with the Wii version is parallel with my feelings “going back” to the SNES version. What he may see as impurities introduced to the Wii version, I see as tweaks missing from the SNES version. Nonetheless, Super Mario Kart is an experience enshrined with very good reason. 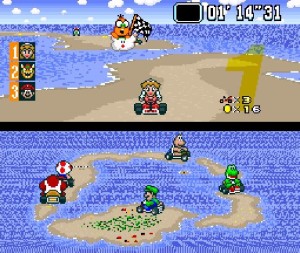 I’ve seen it referred to as an abstraction of go-karting, but it’s more an abstraction of Super Mario Bros. Your adversaries are your timer, as your driver jumps, hits question mark blocks for powerups, throws shells, and avoids obstacles to reach the finish line [flagpole]. It’s Mario in 3D, essentially, and a testament to the primal strength of the Super Mario Bros. game design.

It’s Wacky Races: The Videogame, where everybody knows your name playing dirty is a virtue, and mischief is encouraged. So many great games revel in the fun of mischief made.

For every time Nintendo has been berated for making “kiddie” games, they should be applauded for their timeless aesthetic choices. What separates Super Mario Kart (and indeed, any Nintendo game) from the rest of the dross is this thing we in the biz like to call “art direction”. This vibrant cast of characters wouldn’t look out of place in a Saturday morning cartoon, and I’m here to tell you that’s a good thing.  Donkey Kong, Luigi, Yoshi, Bowser, and Princess Peach have each become so familiar they can headline their own games and still sell a million copies.

It blew the Mario game wide open – beyond platformers – into racers, sports, RPGs, and fighters. It was just a great idea.

Super Mario Kart deserves every bit of nostalgia lavished on it. Everything about it is memorable. Just don’t show it to your flatmate.

* This review was delayed by at least two days due to Flatmate Mario Kart Addiction.

I’m not sure it could be any more blatant. PRZ:BR came out in 1996. Your favorite SNES (<oldmeme>sorry Power Rangers I’mma let you finish but…</oldmeme>) game of all time Super Mario Kart came out in 1992. They are the same game, only 4 years later the game is more ugly, has less variety, and is mildly retarded. I mean, ok, it’s not surprising that Power Rangers had a kart racing game. Everyone has a kart racing game. I have one. It’s just me and it’s really a mountain bike and also it’s real life. But if I drink enough it looks like mode seven.

Just look at this!

You can hop, powerslide, shoot a thing, hit a zip-pad… I would actually feel better if they put turtle shells in here because I guess it would feel a little more like something I could appreciate. Instead you can actually hear my eyes rolling. Do you know how gross of a sound that is? It’s like… slluurrrrmmmasssshh or something… anyway, you don’t want to hear it.

And unlike that other Power Rangers game I reviewed, the Zeo franchise came well after I was a sucker for the Mattel and Mars Bar Quick Energy Chocobot Hour marketing machine. There isn’t nostalgia here for anything other than the game they’re failing to properly steal from.

IN CONCLUSION: Do not play, or at least play with the music up so you can’t hear your own eyeballs rolling around because that’s super gross. Just go play Mario Kart for better memories, better gameplay, less garbage, and less FEELING BAD ABOUT YOURSELF FOR PLAYING A FOURTEEN YEAR OLD POWER RANGERS KART GAME WHAT HAS HAPPENED TO MY LIFE.