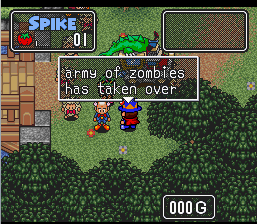 Wow, this game is insane. It starts with a van with a dinosaur tail driving over a bridge. Then some sheep dudes and a hat dude and an old dude pop out. Then they start talking about all of these places that I suppose exist in this world: Vladamasco (!), Batland (!!), and Ratville (!!!). Then there’s something about zombies taking over the world or something. All right! It’s fucking GO TIME!

Or is it? It isn’t. Despite this, there’s a fair bit of exposition left. Pre-playing exposition. If there’s something excruciating in these older SNES games, it’s making me hit A and making me read a bunch of nonsense before I start playing. Come on, game.

Eventually, though, you get control. Hurray! Testing the buttons reveals a jumping button, and a spinning-and-probably-hitting button! Upon reaching the next screen, an old fairy man (awesome) makes you jump over a bunch of logs to show that you can jump correctly (not awesome). Fifteen logs, in fact. Fifteen! And when that’s done, you have to spin-hit 30 rocks! THIRTY! And then, a hat throwign thing that takes like 10 seconds — FIFTEEN TIMES! This game’s ahead of its time — stupid exposition before gameplay, then stupid tutorials before gameplay? This is Okami, decades before Okami!

Here’s the rub — the game itself seems pretty good. It looks insane, and lovely, and the player control feels tasty. But all of this junk at the beginning does NOT inspire confidence. Am I going to have to follow the poorly-translated (and it IS a poor translation) political machinations of Ratville when I just want to be spin-attacking dudes in the face? Will they slowly introduce new mechanics and make me “practice” them over and over? I think there are levels up — will I need to do that for hours upon hours?

Oops, I spoke too soon — I now have to collect cards, apparently. I guess I’m a magician or something, and they’re “card tricks.” VIDEO GAMES I AM SO MAD AT YOU!

One thought on “Twisted Tales of Spike McFang”