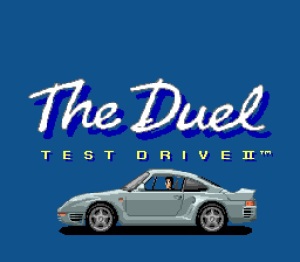 I know that I rented this game when I was a kid. I also know that, despite with my capacity for playing awful games at length, Test Drive II was an underwhelming experience for me even then. So check this out. You pick a car and a track. And you drive. Down a road. From a cockpit perspective. Sometimes a thing beeps, which presumably means that you are close to the police. The police might turn their siren on, but if you outrun them a man says “yeah!” and you’re in the clear (this is intuitive because it is exactly like real life, obviously).

That’s basically it? You can race another car if you like. There’s traffic to dodge. But that’s all the things. I suppose that maybe the graphics might have been impressive and that’s probably one of the most ridiculous things about reviewing old games. We’re never impressed by how they look unless they’re outstanding.

But also, “realistic” racing games in a post-Gran Turismo world? Unless it’s a kart game, forget it. You can’t even compete. It’s really hard to go back. You can’t go home again. And maybe that’s the real problem with post-nostaligic game reviews? It probably is. I mean, here we are in a world where Need For Speed: Hot Pursuit is playable on a phone that fits in your pocket. And then I boot up a rom of a 16-bit game that is completely unspectacular? So, I suppose, I write something witty (obviously not what I’m doing right now, but whatever) and move on to the next game, until I hit something I recognize and can write about with a little more authority.

Essentially, I feel sorry for these games. But what’s really neat about this is that I’m sure there’s a bunch of people out there who played Test Drive II: The Duel and loved the shit out of it. They made it into their own game and provided their own subtext. They imagined a situation where you were racing your arch rival across the country to win the heart of the girl you both love. Who even knows?