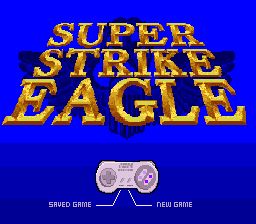 According to the Oxford English Dictionary, eagle is a Noun defined as follows: “A small, but not too small, bird that eats up other birds, if it so chooses, and never without jam, yum, yum.” Yum.

But this game is not about eagles, at least not the regular kind. No, these are eagles of a rather metaphorical kind. The kind that people fly around in. And they shoot other people, but not with jam. With bullets, and missiles and other such things. Obviously, I was out of my element. I said to the game, I said: “But game! I do not have a pilots licence! How will I fly your aircraft.” And the game said, “Well, it’ll be tricky, but it’s not really that realistic.” And I said,  “But how realistic will it be?” hoping for jam.

“Really not very,” said the game. “But it will pretend to be realistic, which is all anyone ever asked for anyway.”

It was right. Frankly, this is far and away the best Top Gun game I’ve played on the SNES, or (dare I say it?) ever at all. Well, maybe it’s not that good, but I’ve had a bit of caffeine, and I’m feeling pretty extreme, so I’d say it was extremely good. Everything in it was top notch. Even though there’s obviously a little bit lost without access to a manual, I was still able to get my plane off the ship and into the frickin air without much trouble. Although, I am an old hand at Microsoft Flight Simulator 98, which taught me the basics. Really, all planes are the same, guns or no. You wanna go up; you push down. After you get that, it’s smooth sailing. Why they don’t make up up is beyond me. Perhaps they’re sadists. Or maybe they’re hyper dimensional beings who have no truck with the whole up, down distinction.

But yeah. This game’s pretty hot. It manages to look pretty good, too. It flips between camera angles in a way that really works for it. It struts its stuff, baby. Like a jet.