Baseball must rank up there as what I believe to be one of the most boring spectator sports in play today. As American as childhood obesity, Botox, and right-wing Creationist nut-jobs, baseball still remains considered as the iconic national past-time, despite the growing popularity of basketball, football, and NASCAR (see “right-wing Creationist nut-jobs”). It’s quite unique in that I can’t think of many other sports that seem to have as much of a requirement of anabolic steroid use out of its players. Maybe I could get into the minor leagues if I injected several pints of synthesized testosterone into my limbs and neck? Wait, never mind, I forget you also need some degree of hand-eye coordination as well. 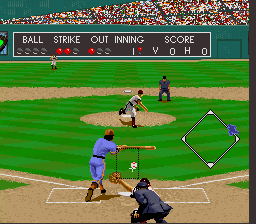 So, if you were to rank this game along with the real sport of baseball, I would say you have a fairly even match as far as entertainment is concerned. On the downside, while baseball manages to get somewhat more enjoyable when drinking with friends, this game tends to fall apart since it requires a bit more attention to play, which I find to diminish rapidly the more shit-faced I get.

To its credit though, I did play against a team called the Chicago Strokers. I don’t think I need to pick apart that one.