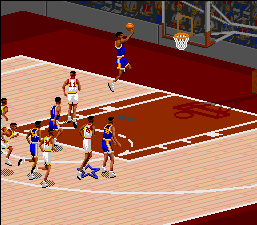 NBA Basketball is a game where ten men dress in two shirts with one ball on a court of play and thrust their bodies at each other, attempting to draw fouls to score points. There is more to it than this, I am sure, but that is all I have ever gleaned from any level of play. There is also cunning ball-passing and heroic jumping over heads involved as well, but, to be honest, other than the one-on-one I played growing up, the entire sport is a mystery to me.

In fact, if any sport is more like a video game, I would be shocked. The constant “yes, a basket” or “no, an enemy basket” is not entirely unlike a gun game battle in Counter-Strike, where the very act of doing that which it is intended for you to do (getting point in basketball, and shooting people in CS) becomes so devalued that one must start looking for the quality of the success to get excited. While in a game of soccer, every goal is a rush, in basketball, the only baskets that are enough to get one’s ass off of one’s couch is one that particularly embarrasses your enemy. Like when someone jumps over someone else’s head< and slams the ball into the net with one hand.

This isn’t going to turn into an article about NBA Jam, as you might think– yes, it is the unholy union between video game tomfoolery and basketball basketery, this is to address the legion of “real” NBA games– and their failure to become like basketball in that sense.

A basket in this game is always the same level of enjoyment. I have not played these games to death, truth be told; I’ve played them hardly at all. But, from my experience, that required varying level of enjoyment from a boring basket to an astounding basket– the crux of a good basketball game– is lost. All baskets are the same. Seeing a star player get a basket is no longer a thrill– you know he’s the star since he has a literal star underneath him– you get the ball to him and he has a near-100% chance to make the ball go into the net. There is no thrill no drama. NBA Jam even fails in this aspect by making every basket so stupidly “awesome” that the contrast is not there, either.

As such, the best basketball games are first-person shooters. That’s fucked up.