Good god, man! It looks as if our shipment of ugly just arrived. I mean, just look at these Neanderthals…

It’s a face only a mother could love. What was your name again? “Fangz!?” Hell, I guess your mother didn’t love you that much, then.

Seriously, science and genetics have failed me yet again. If there isn’t part gorilla DNA in there, I’ll eat my hat. That is, assuming “Python” here doesn’t eat it first. 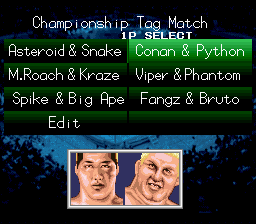 Alright, you couple of charm-school rejects are on my team. No, don’t try to thank me, I don’t need you to get yourselves all exhausted before the match from attempting to form the right brain waves in order to mimic human speech. Just put on your tights and matching knee pads, drag your knuckles into the ring, and beat each other repeatedly with folding chairs until one team suffers enough blunt-force trauma to the head that they can no longer recall how to properly SNAP INTO A SLIM JIM!!

And no lobbing of feces this time. That’s why they won’t let you back into the Georgia Dome.

This isn’t a fight. It’s a slaughter. Aggression. Dominance. A violent choreography of testosterone and spandex, as one side proudly asserts its alpha-male status over the other. To the victor, a giant belt of leather and precious metal, one that will be displayed prominently to win the adoration of the advertisers, action-figure manufacturers, and females of the species. The burly, bearded females of the species…

And where do I stand? Behind the losers, my hands fumbling about the gamepad, trying but failing to properly make heads or tails as to how to keep from getting repeatedly thrown against the ropes and clotheslined. The internet tells me this is actually a great game, though on the condition that you take the time to read the instructions to know the various moves and controls.

Well, guess what? I don’t have access to the manual, so fuck you, internet…smug bastards.