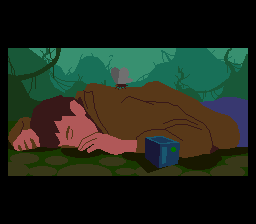 Flashback is a brilliant action/adventure game from Delphine Software, the very same developer that provided us the timeless classic Shaq Fu.  In it, you play as Conrad Hart, a generic-looking man sporting crisp blue jeans, a slick brown jacket, and a magic semi-automatic pistol with INFINITE AMMUNITION—UNLOCKED!  A bold combination indeed for an enterprising man-of-action, you start off stranded in the middle of the jungle after being shot down during an escape attempt on a hover-bike.  With no recollection of who you are or why you were being pursued, you encounter a holocube with a recorded message from yourself, informing you that you need to get in touch with a friend of yours in New Washington (creative indeed!), who will help clarify everything for you.  With his assistance, you regain your memory and subsequently continue your investigation into the real motivations of your assailants.

The game’s theme borrows elements heavily from various other science fiction sources, such as Total Recall and Blade Runner (one mission in the game even involves you tracking down a replicant, which the game makes no attempt to refer as otherwise), not to mention various gameplay and visual elements bearing striking similarity to Another World, a.k.a. Out of this World (of which this is not a sequel, kids!), in particular its use of rotoscoped animations and vector-graphic cutscenes, as well as a somewhat similar use of a gun and force shield in combat (altogether not too surprising considering Delphine published Out of this World only a year before Flashback‘s initial release, which likely led to a reuse of code for the latter project).  Regardless, Flashback does an excellent job of pulling all of this together, packaging it up into a fun and unique gameplay experience.

In all, Flashback is one of those games everyone should play.  It may be a bit slower paced than other games (particularly at first), but putting forth the time, I think you’ll enjoy it.  No, really, you can trust me…I’m looking out for you here, ya know.  Come on, now, give it a try.  For me at least.