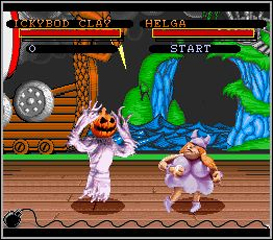 Like every book, movie and professional wrestler, every video game needs a gimmick to hook people in order to sell copies.  Dawn of the Dead has zombies, Pride and Prejudice has zombies and The Undertaker IS a zombie. This game’s claim to fame is that it has … well … the fighters are all made of clay. Alright, I’ll bite. Not every gimmick can be a winner. The biggest problem with Clayfighters is that even though it has such an outlandish premise that peaks your curiousity, it just can’t back it up with any sort of decent gameplay.

Even though I loved playing this game as a kid, as an adult it just falls short. There’s absolutely nothing redeeming about this piece of crap. A moveset limited to pretty much just strikes,impossible combo combinations,  an AI that will beat you before you ever get a chance to land any sort of offense and choppy animation are just three of the many problems that plague this game.  One fight against the Elvis impersonator destroying me all the while screaming “Watch the hair” despite being on the opposite side of the screen was enough for me to throw in the towel here. It’s funny because I can actually remember loving this game growing up but the problem with Nostalgia, is that just like your ex girlfriend, it’s never as good as the first time.