I remember enjoying this game, at around the same time I was playing the various SNES Street Fighter games. Going and back and playing this one, I really don’t understand why, especially compared to its notable contemporary.

The game sucks.  It’s not as bad as Ballz 3d, but it’s pretty terrible.  Doesn’t control smoothly, special moves are not differentiated from normal moves, hitboxes are bizarre, movement is bizarre, pacing is strange, since damage varies wildly from move to move, priority as well, etc etc.  Nostalgia paints too pretty a picture.

I guess fighting games are actually really hard.  They’re not easy to make.  No fighting game I know of has been really balanced, in terms of character selection; there’s always one character, or a few, who are head and shoulders above everyone else.

Even besides that, the basic engine is so intricate and so full of nuance that one little thing can screw your entire game over.  And people didn’t really have very good ideas about what to concentrate on in a fighting game.  Look at all these other franchises – Killer Instinct, Primal Rage, Clayfighters, etc.  Try them now, and they’re just unplayable.  They are some of the most hideous games to behold, as well.  The animation is wretched, especially.

Two dimensional fighting games in general are a weird genre, so absorbed in their own tropes that their whole aim is to refine them.  Some of the decisions that were made about the genre back in the mists of time have persisted because of both tradition and ease of gameplay (or a combination), even though they’re quite weird when you think about them.  Crouching and jumping are there to add extra attack vectors that are easily visually recognizable, and somewhat analogous to real world actions, but you’d pretty much never do either of those things during a one-on-one fight like that.  Even if you had super martial arts powers.

I’m sort of rambling because I don’t know what to say about Clayfighters.  I thought I would have some funny shit to say, but there’s not really much there.  One of the characters is a snow man.  Another is a blob of goo.   More creative than “karate master in a white outfit,” but still not enough to make it a game worth playing.  Definitely a dead-end in terms of attempts to capitalize on the 2d fighter thing. The best I can say is that the AI is pretty vicious without being really irritatingly cheap.

I’ll be honest. I didn’t play this game. I have played numerous versions of this game but not this one specifically. I downloaded the rom but it kept freezing on my DS every time I got to the part where Wagamama shows up. 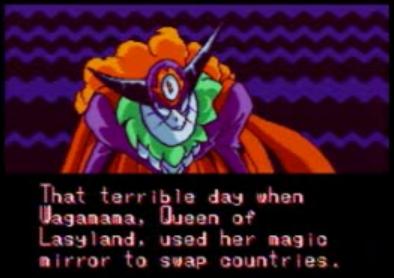 No that was not a mistake, nor was it a joke. Someone named the villain of this QIX rip-off Wagamama. I assume that she is the Supreme Overlord of Fox News’ Atlanta affiliate WAGA Fox 5 News .

Here is the message I sent them on MySpace:

I am a big fan of the news which you are good at. I am also a big fan of your boss, Wagamama. I like how she made you named the station after her so people know it’s hers, like the same way dogs pee on each other. You know what I’m getting at.

What’s it like working for a fine bitch like that? Using mirrors and shit to complete fuck with the townspeople in Bizyland??? And then this young fuck and his magic chalk come around like a bunch of dick bags and start drawing over the rocky, depressing landscapes you worked so hard to create and then that shit transforms into flowers and all sorts of other pussy nonsense.

Look, I know this is short notice, but I’m going to be in the ATL next week and I’m really looking forward to the job interview you’re agreeing to setup with me by not replying to this message.

I’m also really looking forward to automatically getting the job you’re agreeing to give to me by answering anything at all to this message. Even if you just write gibberish back to me, I will assume that I have the job and just start showing up to work everyday. I’ll even bring my own mirror so that we can turn all sorts of shit all topsy-turvy.

So in summation, if you don’t write back, I have a job interview whenever the fuck I want, any time next week. And if you do write back, even if it’s just to say fuck off, then I have the job and will expect some fucking monies every week.

As of right this moment, they have not replied. I’m going to be in Atlanta as of this Wednesday.