Our first guest submission covers a game we didn’t review back when we were doing games that start with numbers. Scotty, author of the snack review blog Snack Sabbath, has written this delightfully well-mannered piece on the cybernetic stickball masterpiece, 2020 Super Baseball. Enjoy. 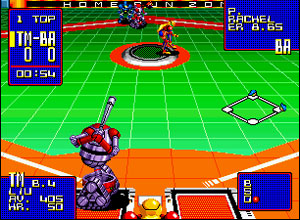 What can I say about this game that can’t be defined by punching
yourself repeatedly in the dick? Nothing.

This game is terrible. Terrible to the point of confusion and physical manifestations (i.e. headaches, night sweats, the plops…)

I can’t figure out the best place to begin without setting my computer on fire with justifiable rage.

First of all, robots playing baseball is incredibly stupid. The only time I would want to deal with futuristic robots would be if I could somehow mechanize my public lice so that they form a metallic monument to my uncompromising virility. Also if robots were completely independent from human control do you think they would play baseball? NO. They’d be putting their robot dicks in toasters and microwave ovens.

In addition to the robot “enhancement” of the game of baseball, the fine makers of this game thought to change the dynamic of the field so that you can only get a home run if you crank it deep center. If you try to bomb one over the left or right walls into the stands you will be denied that satisfaction as they have erected giant Plexiglas walls. There’s a reason home run derbies are awesome. They are the one of the most awesome parts of baseball. Taking away the ability to hit copious amounts of home runs is like taking away Mike Tyson’s ability to have intercourse with people against their wills in cheap and seedy motels; dull and “safe”. And no one wants that. When I watch baseball I wanted to be raped by the excitement of a home run. Just shove the mighty finger of home runs into where my pee comes out and I’ll be satisfied.

Now call me a traditionalist but I think the only “enhancements” that should be made to baseball players are steroid related. Do you think Roger Clemens needed robot arms? No, his cannon was made through the wonder of pharmaceuticals and not through advanced robot surgery. Surgery is for douche bags on ER, steroids are for men that don’t give a fuck about having shrunken testies. Purchasing upgrades for your character is sweet if you’re going to smash the fuck out of Orcs with your LV.9 Flail of Constant Misery, but this is baseball, not Magic Man’s Mountain of Wizardry. Buying upgrades in baseball is a bullshit feature and a waste of my time.

Not to let the bullshit graphics and horrible concepts be the only testaments to travesty, the makers of this game have also ensured that the game play is as painful as repeatedly ripping glue traps off of my ass (with the cheeks spread so as to expose the meat). The mechanics are the same as every other baseball game from that era and before. In fact I would go so far as to say it’s the exact same as every baseball game on the NES but they shellacked it with SNES caliber graphics in the hopes that no one would see how vile it is. The graphics are basically the same as a pervert hiding out in the forest; hard to focus on but if you take the time to scrutinize the scenery you’ll see his sweaty, crooked dick sticking out of a hole in his sweatpants.

This game is nothing but sweaty, crooked dicks.

I would only recommend this game to foreigners who have never seen baseball or retarded futurists.