File this one under things that aren’t as they seem as well.

I mean, really– a no-name platformer with an ugly looking kid and a soccer ball for the SNES. This game has no right being good. And yet…

Okay, maybe it’s the soccer fixation speaking. That’s the only logical explanation that I would actually enjoy a game like this, right? I mean, I’ve never even heard of it. Surely someone would have told me it was worth playing at some point! A friend, a magazine, a ouija board, an opium dream, anything. I know the latter helped me break 1 million in Geometry Wars, where was it this time?

Seriously, this game is really fun. Don’t let the terrifying title/loading screens fool you. You have a soccer ball, and you can kick it screens away and it just waits there. If you run away without the ball, it doesn’t “find” you. Likewise, you kill a baddie, and he doesn’t reappear when you go back to look at the surprisingly good backgrounds. You can balance on the ball, kick it at enemies, kick it up to get secrets, bounce it on your head, bounce on it yourself, dribble with it… maybe more, who knows? And all of the sprites are fun and kind of hilarious. You can jump in the sewer and hit rats or battle fireman-slash-mechanic guys. There’s the typical “collect these funny looking things” angle, too, but it’s hardly a hassle, given he remaining awesome this game is drenched in. 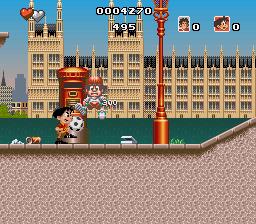 Seriously, guys. Sports-related platformer. It works! Next I’m going to be a fan of Izzy’s Quest or something (Izzy was the mascot of Atlanta’s 1996 Olympics, and yes, he had a platformer, and yes, I remembered that without Wikipedia, so if I’m wrong, don’t act like you’re all better because you had the patience to fact-check me where I couldn’t fact-check myself).

In short: Play this game.

3 thoughts on “Adventures of Kid Kleets”